Starting on the first of August of this year, it is no longer allowed to wear a Burqa in institutions focused on education, governmental business, healthcare and public transport. This is the result of a law that was proposed by the VVD and the PvdA. The ban on facial covering in public spaces has long been a topic of discussion in Dutch politics, but now a decision has been made.

It comes as no surprise that Geert Wilders, the Dutch politician who is best known for his hatred towards Muslims, is extremely happy about this new law. Dutch politicians have placed the Burqa at a crossroads in Dutch policy-making. On the one hand, the Dutch constitution states that everyone has freedom of religion, which includes religious dress. On the other hand, Dutch politicians state that in order for public safety to be ensured, everyone’s face must be visible in institutional spaces. Hence, the ‘Burqa-Ban’ also includes facial coverings such as ski masks and motor helmets and is called ‘Wet gedeeltelijk verbod gezichtsbedekkende kleding’ (EN: Law partial ban face covering clothing). Funnily enough, however, apart from some city bans on wearing a balaclava in public, such matters of public safety and facial covering were never really an issue until Geert Wilders started arguing for a ‘Burqa-ban’. Politicians in favor of the ‘Burqa-ban’ insist that the law is necessary for safety reasons, and thus completely disregard the constitutional right to freedom of religion, while other parties argue that there is no proof such a ban would be a productive step towards a safer society. Let’s not forget, it is estimated that approximately 200-400 people in the Netherlands that wear a Burqa or Niqab out of the total of approximately 17 million inhabitants.

The Netherlands has also seen ‘feminists’ bickering over Burqa’s. Many white, non-Muslim womxn seem to think that they have a say in what is and what isn’t appropriate for Muslim womxn. As a white woman I recognize my place and rather than speaking for Muslim women, I’ll only say that the ‘Burqa-ban’ is defying the Dutch constitution—but apparently, we do not care about that anymore in 2019 in the Netherlands. 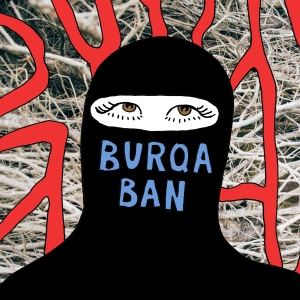 What I will say is that the debate around this subject reveals xenophobic and racist rhetoric. Per example, Dutch political party SGP stated that the Burqa should be banned because refugees ‘need to integrate into Dutch society.’ However, research has shown that most people who wear a Burqa or Niqab are born and raised in the Netherlands, and thus ought to be fine in that department.
Another thing I will talk about is the effect of this ban. Realistically, people who wear a Burqa or Niqab for religious reasons can no longer travel longer distances unless they have a car and a driver’s license, because the new law does not allow them to board a train, a bus, or any other form of public transportation. People who wear a Burqa or Niqab will lose their jobs if they work in the government, in education or in a healthcare institution. Furthermore, Burqa or Niqab wearing mothers will not be allowed on school property—no, not even the playground—to, per example, pick up their children.

All of these very real and intense effects on the lives of people who wear a Burqa, are the result of a quest for safety, but whose safety are we talking about here? Did the proposing political parties consider the safety of Burqa-wearing people?